Nicolaus von Himsel (1729 – 1764), doctor, collector, museologist, encyclopaedist and traveller from Riga. In 1773, his natural history and art collection was placed into the Himsel Museum, the first museum in the Baltic States and one of the oldest museums in Europe. 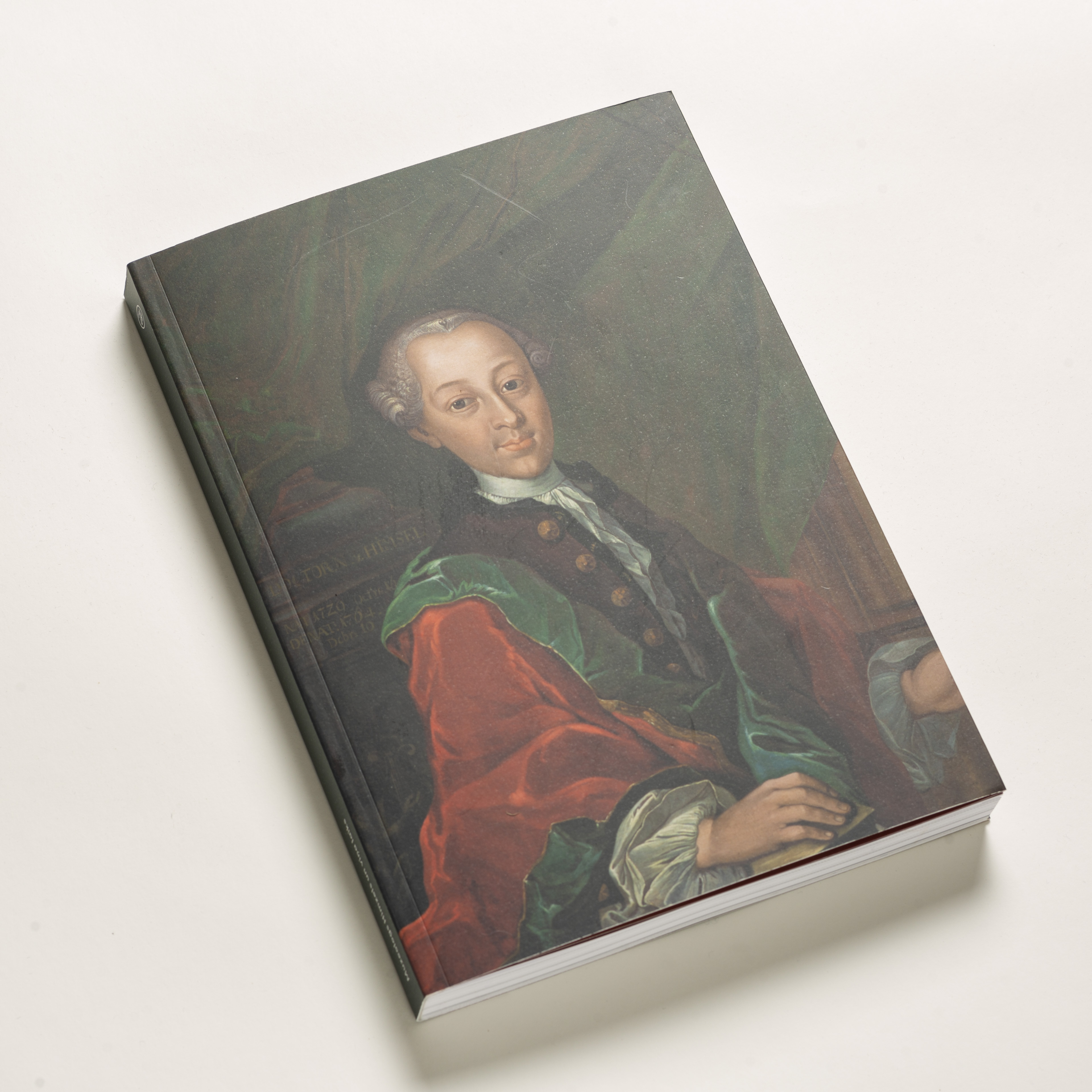 Nicolaus Himsel (he may have obtained the aristocratic “von” on his travels during the reign of the Holy Roman Emperor Francis I (1745 – 1765)) was born in Riga on 16 October 1729 into the family of Riga’s Chief Physician (Oberphysicus) Joachim Gebhart Himsel (1701 – 1751) and his wife, Anna Catharina Himsel, (nee Martini, 1707-1775). Catharina was also descended from an old Riga family of doctors. The family had ties by blood or marriage to notable Riga councillors and patricians.

After gaining a good educational grounding at home (which had an excellent library with volumes in several languages), he attended Riga Dome Cathedral School, then in 1747 began studies at Konigsberg University, later moving to Gottingen University, then one of the most modern in Europe. In Gottingen he obtained a medical degree in 1751, writing his dissertation on De victu salubri ex animalibus et vegetabilibus temporando (On a healthy diet, based on experience of the animal and plant kingdoms), supervised by the prominent natural scientist Albrecht Haller (1708 – 1777). 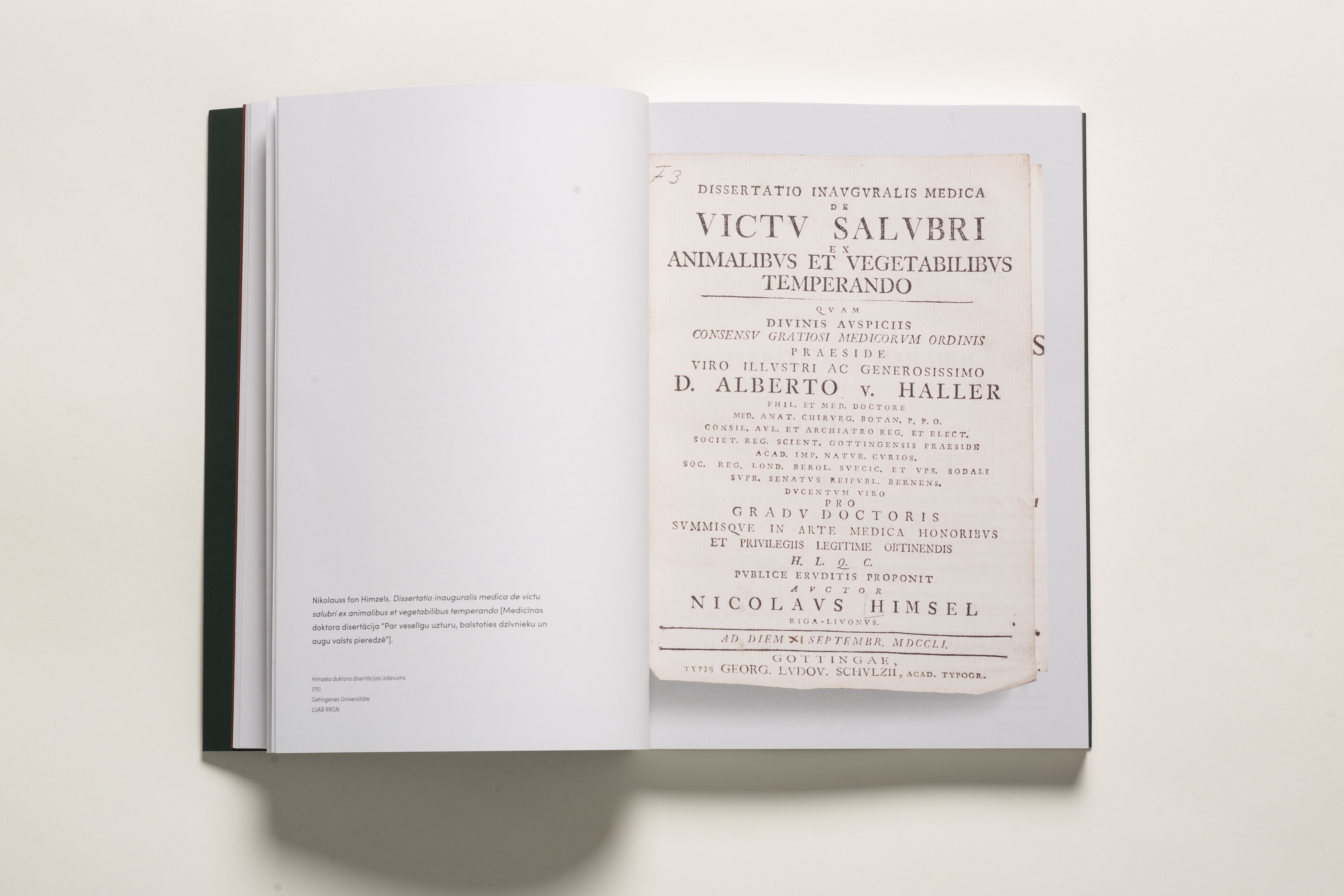 For example, in Amsterdam he noted: “The fondness of the Dutch for cleanliness is well known; but on this matter they exaggerate, and upon my arrival I was surprised to see two girls in aprons labouring for more than an hour washing the steps in front of their house. It was the evening before Sunday, which explains their industry and particular care about tidiness. This example was enough to prove the veracity of a friend’s observation that the good women of Holland waste half of their lives in exaggerated worries about cleanliness.”.

In an English theatre he was driven to distraction by the behaviour of the locals: “Before the performance, one would usually hear arguments and noise from the galleries, which were filled by the mob. Occasionally they would address each other with their fists. – Some would sing their favourite arias, [62] filling the whole auditorium with their voices, or a whole choir would resound from above, and this would continue until the singers received attention from on high. This was the worst time for the patrons in the stalls, as they had to suffer the coarse slovenliness of the simple folk, while those in the seats were showered from the gallery with half eaten apples, nut shells and fruit peels.”.

On his journey, Himsel purchased natural science samples, artworks and books. He precisely documented his travel impressions in his diary, whose as-yet-unpublished three-volume manuscript is held in the Latvian Academic Library. The breadth of Himsel’s interests is impressive, ranging from arsenals, shipyards, factories, mines and metallurgy to political institutions, architecture, theatre, painting, music and literature. He also visited hospitals, pharmacies, old people’s homes, orphanages and schools. He was particularly interested in natural history collections, art galleries, libraries and botanical gardens. He met some of the leading thinkers of the day, including the famous Swedish botanist Carl Linnaeus and French Enlightenment figure Jean-Jacques Rousseau. His detailed descriptions of the monetary systems of each country he visited is of special interest to historians. 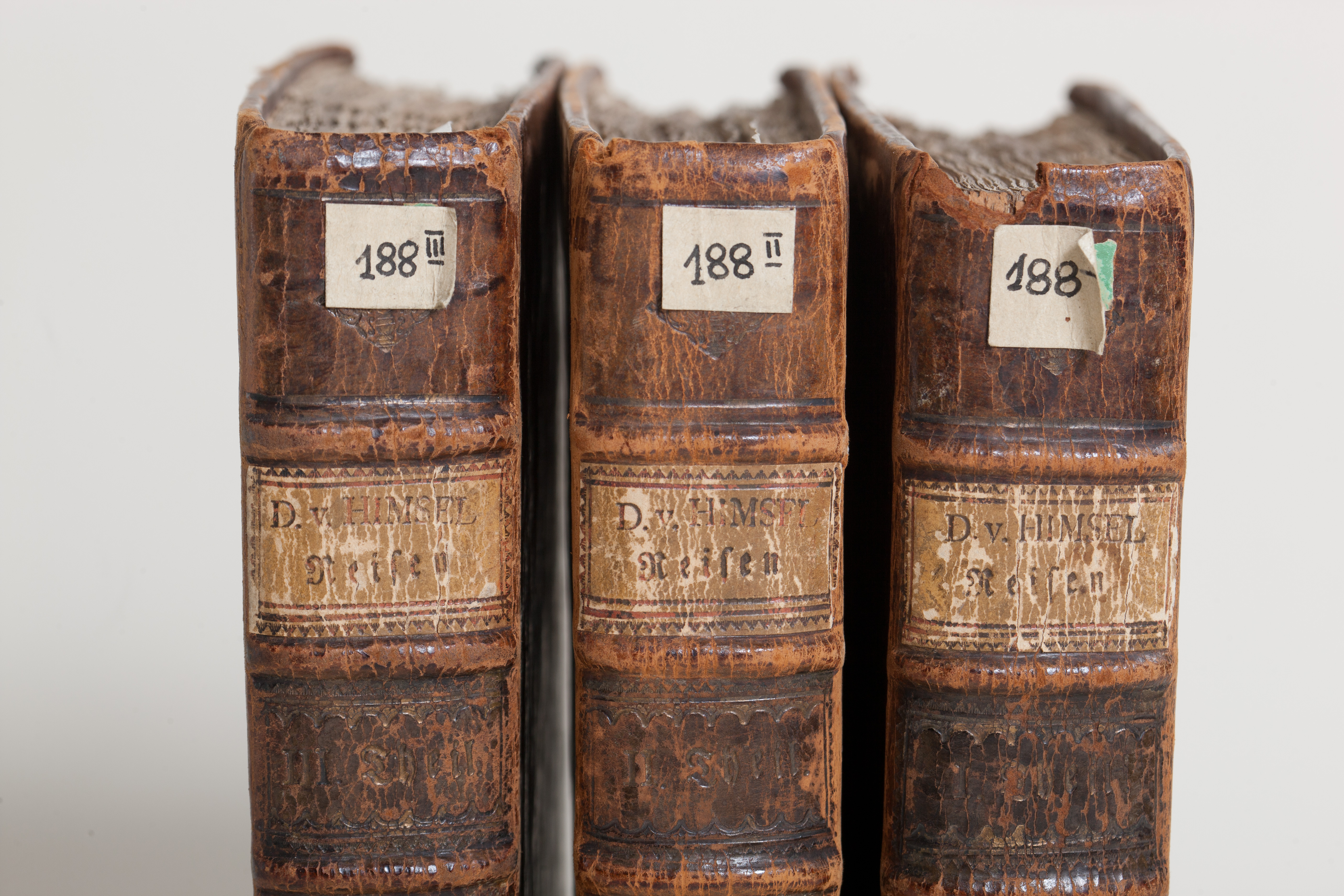 After returning to Riga in the spring of 1757, Himsel served as the City of Riga doctor. He devoted a lot of time to science and continued corresponding with the European scientists he had met on his travels. In 1760, Himsel became a member of Britain’s Royal Society.

After catching an “infectious fever” from a patient, Himsel died in Riga on 10 December 1764. After his death, his mother Catharina Himsel acted on her son’s wishes, establishing on 22 December 1765 the Himsel Family Bequest, which (including some items from her own father and grandfather, Nikolaus Martini) was gifted to the City of Riga. On 22 February 1773, Riga Council accepted the gift and resolved to house it in vacant space at the city Anatomical Theatre at Kalēju iela 34/36, naming it the Himsel Museum (Himselsches Museum). The book collection containing around 3,400 volumes went to Riga City Library. After Catharina’s death in 1776, the city also received 1000 Albert dalders for the upkeep of the museum. This made it possible to make new acquisitions. 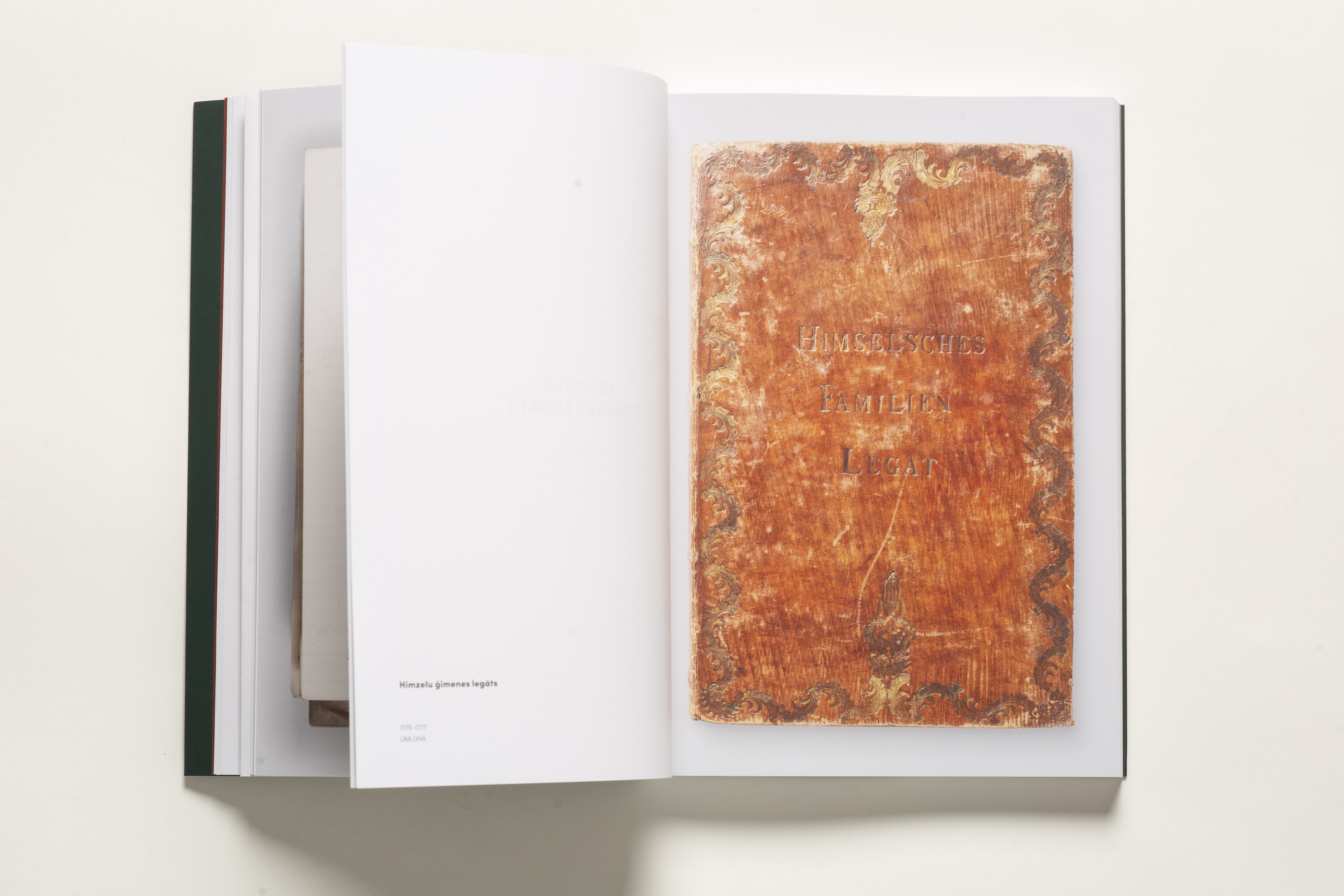 The Himsel Museum housed an important collection of natural history objects and minerals, anatomical specimens, physics and optics instruments, engravings and paintings, and applied art items. Some mineral samples, red and white chess figures carved from bones, wooden eating vessels and utensils, miniature figurines, Dutch clogs and a few paintings and engravings from the original collection are identified and preserved until today. However, as the original inventory list from the Himsel Museum has not been found, it is impossible to determine precisely what ended up in the Himsel Museum thanks to the bequest and what was acquired later. In 1860, the Himsel Museum’s natural science collections were handed over to the Riga Society of Natural Scholars, while the antiquities collection went to the Riga Society of Historical and Antiquities Scholars. In 1868, the Himsel Museum’s art collection became part of the Riga City Picture Gallery’s collection. Following this disbursement, all of the Himsel Museum’s collections remained the property of the city and were identified by special labels marked Himselsches Museum. Today, items from the Himsel Museum are held in at least three Riga museums – the Museum of the History of Riga and Navigation, the Latvian National Museum of Art and the Latvian National Museum of Natural History.

A memorial plaque commemorating Nicolaus Himsel is found at the Himsel family home at Mazā Jauniela 5, Riga. In 2019, the thinktank Creative Museum released “Museologist Himsel and his Time,” the most extensive collection of materials on Nikolaus Himsel published to date. A first edition of Himsel’s European travel diary Die Reisen (“Journeys”) is being prepared.

4. Museum of the History of Riga and Navigation homepage https://www.rigamuz.lv/rvkm/en/about-us/